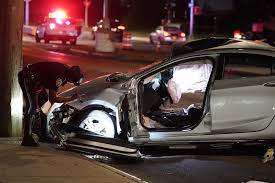 DUI Car Crash: COLUMBUS POLICE DEPARTMENT is investigating an accident where a 22 years old woman is a suspect of not one but two accidents and a case of minor neglect.

The CDP officer reponed to a 911 call around 5:00 pm on Tuesday at the 1000 block of 5th street of Columbus where the crashes were expected to happen.  When the first responding officer reached the location of the distress, they find a car with additional front-end damage. The damage shows that before ending it in this situation car hit something to distrail it from its path.

According to many onlookers, investigators find out that an accident has occurred where a woman supposedly fled from two crashes and was later arrested for allegedly driving under the influence while a child was with her.

After further looking at the situation they find the car investigator find out that the car had crashed into a building and a flagpole before ending up in this situation. During the course of the crash and DUI investigation, the officers determined that McCoy’s vehicle was involved in a separate crash that occurred nearby where the driver fled the crash scene.

Many Witnesses on the spot of the incident reported to officers that the driver of the damaged vehicle, Rebekah A. McCoy, 22, appeared to be intoxicated, LT. Matt  Harris, Columbus Police Department spokesman said.

After that, the officers find out another thing that made this case more disturbing to the public. The officers also observed a small child in the back of the damaged vehicle.

Many spectators also vowed that they think the diver was heavily intoxicated when she came out of the car after the accident. They added that the woman which we now know as Rebekah McCoy fled the scene without any child and stumbled while running out of there.

The investigator find her in no time and she was transported to Columbus Regional Hospital for a blood draw to find out the level of alcohol and any other substance in her system and administered field sobriety tests to McCoy. She was taken to the Bartholomew County Jail with a 48-hour-hold.

According to the officer, The young child in McCoy’s vehicle was released to a family member.

She will be charged with ‘operating vehicle while intoxicated with a minor in the vehicle’, ‘neglect of minor’, ‘ two counts of leaving the scene of property damage crash’.